1-7 Microbes are discovered to cause disease

Many philosophers and physicians long suspected that living things were the agents of disease. In volume 6 of his epic poem De Rerum Natural (On the Nature of the Universe) written sometime around 50 B.C., Titus Lucretius Carus speculates about invisible atoms causing disease. This poem was only one idea among many. Some thought that an imbalance in humors caused illness, while others felt that supernatural forces were at work. The prevailing theory held by most doctors of the 19thcentury was that chemical toxins were carried from an ill patient to others, causing them to contract the same malady. The bacteria that were present were seen as a symptom of the disease and not its cause.

Ignaz Semmelweis, pictured in Figure 1.14, a Hungarian physician working in Vienna, made the first breakthrough in the true nature of disease. He realized that asepsis in obstetrical wards could prevent the transmission of childbirth fever from patient to patient. He, therefore, instigated a policy for all attending physicians to wash their hands with chloride of lime (a mixture of calcium chloride hypochlorite, CaCl(OCl); calcium hypochlorite, Ca(OCl)2; and calcium chloride, CaCl2) between patients. This innovation dropped the mortality rate from 18% to 2.4%. 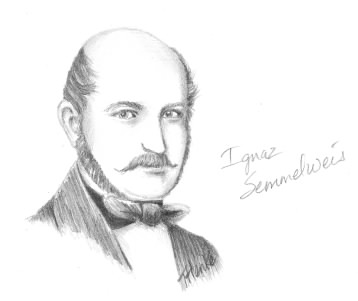 Ignaz became a vigorous proponent of his ideas, but the Hungarian doctor's efforts were opposed by many who could not accept that physicians themselves could be responsible for spreading bacterial infection. Ridicule of his idea caused him to move from Vienna to Pest, Hungary and ultimately played a role in a nervous breakdown. Ironically, Semmelweis died from an infection that he contracted during surgery while recovering from his nervous breakdown.

Before his death, he published his ideas in a paper The Cause, Concept, and Prophylaxis of Childbed Fever in 1861. The paper's poor writing contributed to the obscurity of the ideas, with physicians ignoring them for 17 years. The delay raises an interesting point about the culture of science. Radical ideas, even those that are correct and can save lives, are sometimes ignored. It takes time to overcome the dogma of the day. The personalities involved and the negative light it might throw on past practices play a large role in the rate of acceptance of a new idea.

In a seemingly unrelated event, Louis Pasteur found something interesting while working on wine souring, a problem where wine fermentations produce a sour taste and very little alcohol. Fermentation of alcoholic beverages was thought to be a simple chemical reaction. Heating, common in most beverage preparations, was thought to cause the breakdown of sugar into alcohol. The wine industry in France asked for Pasteur's help because wine souring was pushing it close to ruin. His work on wine-making revealed that various yeast strains actually perform the process of converting sugar to alcohol. He then showed that the wine was going bad because a contaminating microbe generated lactic acid instead of alcohol from the sugar. This controversial idea gained credibility when Pasteur solved the problem by heating the wine and killing the contaminant. The heating process was named pasteurization in his honor and is still widely used today. In a brilliant step of generalization, Pasteur realized that souring of wine and infectious disease shared a common thread in that they both might involve infection by a microorganism. His suggestion that microbes cause disease became known as the germ theory of disease.

Joseph Lister became aware of Semmelweis's work and, together with Pasteur, realized the true nature of disease. He then recognized that he could use this idea to help his surgery patients. At this time, major injuries, broken bones, or surgery would often result in infection of the damaged area, sometimes leading to amputation or death. Lister found he could greatly reduce the number of microorganisms on wounds and incisions by using bandages treated with phenic acid, a compound that killed microorganisms (phenic acid, now known as phenol, is the active ingredient in Listerine). During surgery, he began the practice of spraying the wound with a fine mist of phenic acid to kill microbes. These practices greatly reduced the rate of infection and mortality of surgery patients, lending further credence to the germ theory of disease.

In 1876, Robert Koch provided definitive proof of the germ theory by isolating the cause of anthrax and showing it to be a bacterium. From this came the development of Koch's Postulates, a set of rules for assigning a microbe as the cause of a disease:

The postulates are Koch's most famous contribution to science, and it is a testament to the utility of these postulates that they are stilled used today to discover the cause of new emerging diseases. Koch went on to apply these principles to study many other diseases, including tuberculosis, cholera, and sleeping sickness. Koch's postulates do have limitations and do not apply to all diseases. For example, if a disease-causing microbe has humans as its sole host and has a significant possibility of causing death, it would be unethical to apply this microbe to test humans as dictated by postulate. Also, it is not always possible to obtain a disease-causing microbe in pure culture.

While attacking the problem of disease, Koch developed the tools for obtaining pure cultures. Advances in science often come from innovations in the available technology. Robert Koch was an influential microbiologist because his pioneering work in the isolation and characterization of bacterial diseases helped identify the causes of many of the disorders plaguing humanity. Further work by other scientists then began the long road to conquering them.

Viruses are shown to parasitize organisms

The ensuing years brought numerous discoveries about the nature of disease. In the latter half of the 19thcentury, scientists discovered the causative agents for anthrax, tuberculosis, gonorrhea, diphtheria, and many more. Researchers made great strides in understanding disorders caused by bacteria, including the solidification of the germ theory of disease. However, some illnesses seemed not to have bacterial origins. Microscopic examination of sera from ill patients revealed no organisms, and the causative agents could not be grown on any known medium. Yet if these sera were injected into a susceptible host, disease resulted.

In 1886 John Brown Buist devised a method for staining and fixing liquid from a cowpox vesicle. Observations of this slide showed tiny bodies that he believed were spores. Although he did not realize it, he was the first person to see (and photograph) a virus. It was not until the middle of the twentieth century, with the invention of the electron microscope, that we understood the true shape and structure of viruses.

In 1884 Charles Chamberland in Pasteur's laboratory created an unglazed porcelain filter with pores much smaller than bacteria (0.1-1 µm). It was possible to pass a solution containing bacteria through these filters and completely remove them from the solution. This innovation enabled the creation of sterile medium without heat and became a standard test for removing all bacteria, especially when testing transmission of disease. By removing the microbes, Chamberland demonstrated that an infectious agent, and not the solution, was causing the illness. This concept seemed reasonable until scientists began to investigate a tobacco infection.

Tobacco mosaic disease is characterized by light and dark green areas on plant leaves in a mosaic pattern. The disease stunts the growth of the plant, therefore reducing yields. Europeans recognized the effects of this disease soon after farmers introduced tobacco from the New World in the 17th century. Adolph Mayer first described the transmission of the disease by injecting fluid from a diseased plant into a healthy one. Nine out of ten times, the healthy plant would become heavily diseased. In 1892 Dmitrii Ivanowski extended this research by the shocking discovery that the causative agent could pass through Chamberland's porcelain filter. He reported his findings, but the idea that the causative agent could pass through the filter was so troublesome that Ivanowsky attributed the phenomenon to a cracked filter or to small spores that passed through the pores. It was Martinus Beijerinck in 1898 who realized the true nature of these particles, making the intellectual leap that the causative agent of the disease must be so small as to pass through the filter known to trap all bacteria. He coined the term contagium vivum fluidum a contagious living fluid.

Some scientists thought these agents were toxins in the fluids of the hosts, but further study revealed that tobacco mosaic disease could cause illness through many transfers from plant to plant. A toxin might cause damage on the first plant, but subsequent transfers should make it so dilute that it would no longer have any effect. These filterable entities were different from bacteria and appeared to depend on their host to multiply. The term ultrafiltrable viruses and later just viruses (virus means poison in Latin) was coined to describe these tiny pathogens.

Bacteria are also vulnerable to viruses. Frederick Twort described bacterial in 1915 and independently by Felix d'Herelle in 1917. Felix d'Herelle was studying a plague of locusts in Mexico when he noticed that a microorganism was killing the locusts. During experiments to characterize this microbe, d'Herelle noticed clear, circular spots two or three millimeters in diameter on cultures growing on agar. At this point d'Herelle studied the spots enough to determine that they came from an agent small enough to pass through a porcelain filter. He dropped the investigation but recalled these observations while studying dysentery in 1915. The illness affected soldiers fighting in World War I, and he soon determined the cause to be the bacterium Shigella dysentery. In the process of investigating Shigella, similar areas of clearing were observed. d'Herelle realized that something in these areas of clearing was killing the bacterium. He eventually determined these were viruses of bacteria, coining the term bacteriophage (devourer of bacteria). Table 1.4 lists these and other significant events in the discovery of the cause of disease.

Table 1.4 Important events in the discovery of the cause of disease.