The power of vaccination is discovered

As soon as physicians realized that microbes cause illness, the search was on for ways to kill or to prevent them from causing disease. In this section and the next, we will look at two series of events that illustrate the emergence of modern treatment of infectious disease: the development of vaccines and the discovery of antimicrobial compounds.

Smallpox was a feared disease throughout human history and justifiably so. It was highly contagious, and almost everyone eventually became infected. Mortality rates were as high as 25% in adults and closer to 40% in children. Those who did survive often had scarring due to the blister-like pustules that form on the skin, but they obtained life-long immunity to the disease.

As far back at the 11thcentury in India and China, doctors realized that liquid from the pustules of a smallpox victim, when scratched on the skin of a healthy patient, would most often cause mild disease. This intentional infection, termed variolation, would also give life-long protection against the virus. Lady Mary Wortley Montague, the ambassador's wife to the Ottoman Empire, introduced variolation to England in 1721. It quickly became a popular practice throughout Europe. Washington even began variolating the Continental Army in 1776.

Variolation had some deleterious side effects. Serious skin lesions inevitably resulted at the site of inoculation, often accompanied by a generalized rash or even a full case of smallpox. The fatality rate from variolation was 1 to 2 %. Today we would find this fatality level to be unacceptable, but at the time, this risk still represented a significant advance.

In 1796, Edward Jenner, an English country physician pictured in Figure 1.15, went in search of a more predictable and safer method of protection against the disease. He noticed that milkmaids rarely contracted smallpox. Further investigation revealed they often contracted cowpox from their charges. Jenner hypothesized that cowpox was related to smallpox, and contraction of the former would protect against the latter. In a classic experiment (and one that would land you in jail today), Jenner inoculated a young patient with cowpox and later challenged him with smallpox. The boy did not become ill, and Jenner was responsible for creating a safer method of protection against smallpox. It is important to stress that the nature of these diseases and their viruses would not be known for over 100 years. Jenner was ahead of his time. 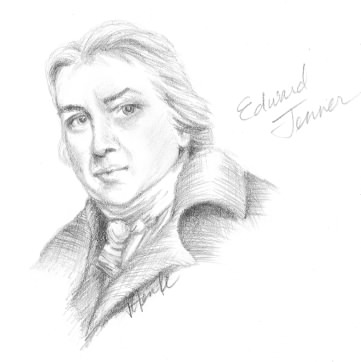 Figure 1.15. Edward Jenner. The English physician who developed a safer method for protecting against smallpox. We would now call this a vaccine. Drawing by Tammi Henke.

Beginning around 1876 Pasteur's studies on chicken cholera led to the development of vaccines to fight the disease. Cholera was a serious problem since it could spread through a barnyard and wipe out a flock in as little as three days. Contaminated food or animal excrement spread the disease. Pasteur identified the cholera bacillus and grew it in pure culture. When injected with it, a chicken invariably died within 48 hours.

Then, as often happens in scientific research, luck intervened. During the heat of the summer, Pasteur returned to Paris and left the cholera cultures used for infection stored on the shelves of his laboratory in Arbois, France. Upon returning, something had happened to the cultures; they no longer caused disease when tested in chickens. With some impatience for the time they were wasting, his group set to work making new cultures of the bacillus and tested these batches on both new birds and those previously inoculated with the ineffective strain. To their amazement, the previously injected birds were unaffected by the fresh bacillus culture, while the new birds all died. Pasteur immediately realized that this was similar to the studies of Jenner.

Pasteur then developed a method for creating cultures that would confer immunity, but not cause disease. Sometimes this involved growing the microbe in a medium in the laboratory where they would spontaneously lose their virulence. In other cases, it involved multiple passes through a susceptible host. For example, Pasteur attenuated the rabies virus by passing it through rabbits. In honor of Jenner's accomplishments Pasteur coined the term vaccination (vacca = cow in Latin) for the process of immunization against disease. In this and several of Pasteur's other discoveries, luck played a part, but it was only helpful because he tenaciously pursued odd results and had the insight to arrive at important conclusions. In Pasteur's famous words, In the field of observation, chance favors only the prepared mind

Pasteur's technique of weakening a strain by a damaging treatment or passing it through a susceptible host was termed attenuation and resulted in the creation of vaccines against anthrax, plague, yellow fever, rabies, and many other diseases. Scientists have developed many vaccines over the years and children today receive various shots, significantly decreasing infant mortality and illness.

We now pick up another thread through the web of microbial history that began with the work of Paul Ehrlich. By 1885, it was becoming clear that the causative agents of many illnesses were microorganisms. As scientists manipulated these microbes in the lab, they found that certain dyes and other compounds could inhibit their growth. Paul Ehrlich began the search for chemicals that kill the microbe, but not the patient, thus curing the illness.

One of the diseases Ehrlich hoped to cure was syphilis, which had reached epidemic proportions in Europe. Little did he realize it would be a 17-year odyssey before developing salvarsan, the first effective chemotherapeutic agent. Salvarsan was the 606thchemical he tried. This arsenic compound effectively kills Treponema pallidum, the causative agent of syphilis.

However, the treatment had many problems, causing long-lasting health complications for those who used it. In addition, despite Treponema being quite sensitive to salvarsan, the physician had to administer it intravenously for optimum effectiveness. Intravenous injection was a recent development, and many doctors were leery of trying the procedure. In London, a young physician by the name of Alexander Fleming, then in the Army Medical Corps, was one of the few that was willing to treat patients. Fleming even got the nickname private 606 from his burgeoning practice. His work validated the effectiveness of salvarsan against syphilis and convinced others to administer the treatment.

Fleming, pictured in Figure 1.16, was a physician by training but spent most of his time studying bacteria. His success with salvarsan motivated him to search for other antibacterial agents. His first discovery was lysozyme, an enzyme produced by many organisms, including humans, which lysed many bacteria. This enzyme is not useful as a therapeutic agent because it is difficult to administer as a drug. Still, Fleming did develop titration methods and assays that would become very useful in his future work. 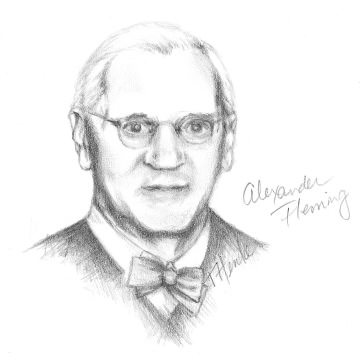 Fleming's arguably most important contribution to science is his discovery of penicillin. In September of 1928, before leaving on a summer holiday, Fleming streaked some plates of Staphylococcus aureus and left them to incubate until his return. In an improbable set of circumstances, the beginning of the holiday was cold, allowing some contaminating mold spores (that had blown in from a nearby window) to grow up on some of the plates. The temperature then increased encouraging the growth of the Staphylococcus. When confronted with a contaminated plate, many experimenters look for the trash bin, but Fleming instead spent some time examining it. The fungus had a zone of clearing around it where the Staphylococcus colonies would not grow, suggesting the fungus was producing an antibacterial compound that had diffused into the medium. Intrigued, he cultured the fungus, a Penicillium mold, and eventually isolated a soluble extract that could kill bacteria and treat a localized infection. He called the new compound penicillin after the mold from which it came. However, due to available technology, it was challenging to prepare a solution that could be used throughout the body without causing problems.

World War II added greater urgency to the search for compounds that could fight infectious disease. If they survived the initial injury, wounded soldiers would often develop life-threatening infections, and there were no effective drugs to combat them. In 1939 Howard Florey and Ernst Chain began a systematic study of antimicrobial compounds to develop treatments for these soldiers and ran across Fleming's report written nine years earlier. They were now able to purify the compound completely and describe its high potency against microbes. The availability of penicillin during World War II saved countless lives. The rediscovery of penicillin touched off a search for other microbes producing substances that could kill or inhibit microbes, leading to the discovery of many more antimicrobials. With Florey and Chain, Fleming was awarded the Noble Prize in Medicine and Physiology in 1945.

In the ensuing decades, the search and discovery of numerous antimicrobial compounds, combined with the development of vaccines, has eliminated many of the deadly diseases that plagued humankind. While we now realize this is a continuing war and not a one-time battle, our understanding of these microbes and the nature of disease will likely keep infectious disease at bay for the foreseeable future. Table 1.5 lists important events in the treatment and prevention of disease.

Table 1.5. Treatment and prevention of disease