1-4 Microbes have profound effects on the environment

Whether measured by the number of organisms or by total mass, the vast majority of life on this planet is microscopic. These teaming multitudes profoundly influence the make-up and character of the environment in which we live. It may surprise you that we know very little about the microbes that live in the world around us because less than 2 % of them can be grown in the laboratory. Understanding which microbes are in each ecological niche and what they are doing there is critical for our understanding of the world. Figure 1.6 shows some examples of environments where microbes are present. 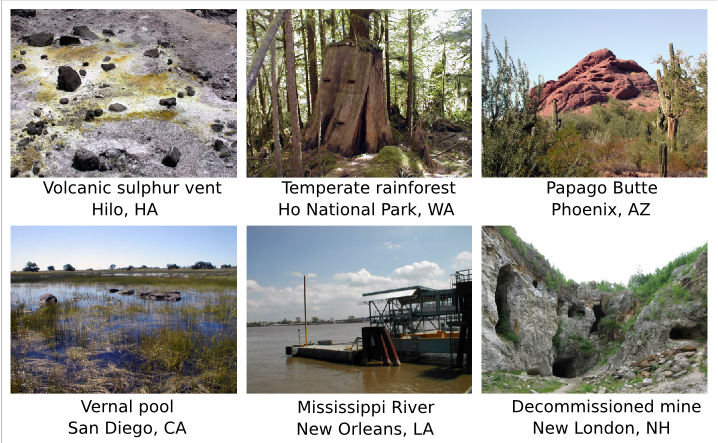 Figure 1.6. A sampling of the different types of environments where microbes flourish. Microbes are capable of growing in a wide variety of environments. Bacteria will grow in frigid glaciers to boiling volcanic springs, dry sands to the open ocean. Figure courtesy of Kelsea Jewell

Microbes are the major actors in the synthesis and degradation of all sorts of important molecules in environments. Cyanobacteria and algae in the oceans are responsible for the majority of photosynthesis on earth. They are the ultimate food source for most ocean creatures (including whales) and replenish the world's oxygen supply. Cyanobacteria also use carbon dioxide to synthesize their biological molecules and thus remove it from the atmosphere. Since carbon dioxide is a major greenhouse gas, its removal by cyanobacteria affects the global carbon dioxide balance and is an important mitigating factor in global warming.

In all habitats, microorganisms make nutrients available for the future growth of other living things by degrading dead organisms. Microbes are also essential in treating the large volume of sewage and wastewater produced by metropolitan areas, recycling it into clean water before discharging it into the environment. Less helpfully (from the view of most humans), termites contain microorganisms in their guts that assist in the digestion of wood, allowing the termites to extract nutrients from what would otherwise be indigestible. Understanding these systems helps us to manage them responsibly, and as we learn more, we will become ever more effective stewards.

Energy is essential for our industrial society, and microbes are important players in its production. A significant portion of natural gas comes from the past action of methanogens (methane-producing bacteria). Numerous bacteria are also capable of rapidly degrading oil in the presence of air. Special precautions during the drilling, transport, and storage of oil minimize the impact of these oil-degrading bacteria. In the future, microbes will find utility in the direct production of energy. For example, many landfills and sewage treatment plants capture the methane produced by methanogens to power turbines that produce electricity. Excess grain, crop waste, and animal waste can serve as nutrients for microbes that ferment this biomass into methanol or ethanol. These biofuels are presently added to gasoline and thus decreasing pollution. As part of the new energy initiative, scientists are engineering cyanobacteria to synthesize and excrete compounds used as biofuel. These microbes only need sunlight and seawater to grow, and therefore mass production of this biofuel should be inexpensive. Other research is investigating the possibility of using another photosynthetic bacterium, Rhodobacter sphaeroides, as a source of hydrogen production. One of these research efforts could one day power our cars, causing little to no pollution and having no net contribution to greenhouse gases.

Finally, we are increasingly taking advantage of the versatile appetite of bacteria to clean up environments that we have contaminated with crude oil, polychlorinated biphenyls (PCBs), and many other industrial wastes. This process is termed bioremediation and is a cheap and increasingly effective way of cleaning up pollution. Figure 1.7 shows before and after photographs of the clean-up of the Exxon Valdez oil spill in Prince William Sound. These techniques may become useful in the cleanup of the Deep Water Horizon oil spill in the Gulf of Mexico. Current research has shown that indigenous microbes are actively degrading the deep-sea oil plumes of that spill and may eventually detoxify much of that oil spill.

Figure 1.7. The Exxon Valdez oil spill. Microorganisms played an important role in removing many of the pollutants released during the Exxon Valdez oil spill in Prince William Sound. Interestingly, microbes were not added to the site, but the clean-up relied on bacteria from that environment. A nutrient solution was sprayed onto the oil to encourage the growth of oil-degrading microbes. Though this was one of the more successful methods used to clean up the oil, but no treatment removed all of the pollutants. (Source: http://www.battelle.org/environment/exxon-valdez.stm.)

Studying microbes helps us to understand the world around us

Microorganisms used in research have many useful properties. They grow on simple, cheap medium and often give rise to large populations in 24 hours. It is easy to isolate their genomic material, manipulate it in the test tube and then place it back into the microbe. Due to their large populations, it is possible to identify rare events and then, using powerful selective techniques, isolate interesting bacterial cells and study them. These advantages have made it possible to test hypotheses rapidly. Using microbes, scientists have expanded our knowledge about life. Below are a few examples.

Some prokaryotes can grow under unimaginably harsh conditions that define the extreme limits of where life can exist. Some species can grow at near 100 °C in hot springs and even 113°C near deep-sea ocean vents. Figure 1.8 depicts such a deep-sea ocean vent. Others make their living at near 0 °C in freshwater lakes buried under Antarctica's ice. The ability of microbes to live under such extreme conditions is forcing scientists to rethink the requirements necessary to support life. Many now wonder if Jupiter's moon Europa may harbor living communities in waters deep below its icy crust. What may the rest of the universe hold?

Figure 1.8. A deep sea ocean vent. Ocean vents are common in areas of the sea floor that have volcanic activity. Water seeps into cracks on the floor and encounters magma. The water absorbs inorganic nutrients from the magma and is heated. The superheated water then flows out of the magma, sometimes quite forcefully, back into the ocean. This hot water contacts the cold ocean water, causing it to cool and release many of its inorganic contents. This cloud of inorganic compounds is highly reduced and can serve as a source of energy for microorganisms. These microbes serve as a primary producer for an entire food chain. The picture shows one type of ocean vent called a black smoker. Water coming out of the vent can be >300°C. Figure courtesy of Woods Hole Oceanic Institute.

Until recently, while we could study specific types of bacteria, we lacked a cohesive classification system so that we could not readily predict the properties of one species based on the known properties of others. Visual appearance, which is the basis for the classification of large organisms, does not work with many microbes because there are few visible distinguishing characteristics for comparison between species even under the microscope. However, analysis of the genetic material of microbes in the past 20 years has allowed such classification. This reclassification spawned a revolution in our thinking about the evolution of bacteria and all other species. The emergence of a new system organizing life on earth into three domains is attributable to this pioneering work with microorganisms.

The fruits of basic research on microbes have been used by scientists to understand microbial activity and shape our modern world. Human proteins, especially hormones like insulin and human growth factor, are now produced in bacteria using genetic engineering. Our understanding of the immune system relied on using microbes as tools. Microorganisms also play a role in treating disease and keeping people healthy. Many of the drugs available to treat infectious disease originate from bacteria and fungi.

Lastly, microbes have informed us about our world through the tools they provide for molecular biology. Enzymes purified from bacterial strains are useful as tools to perform many types of analyses. With the rapid advance in DNA sequencing technology, it is now possible to determine the entire genetic sequence of any microbe desired in just a few weeks. With this information in hand, scientists can predict the capabilities of the microbe and manipulate DNA in useful ways. We now know the entire sequence of the human genome, except regions of repetitive DNA, which will hopefully lead to medical practices and treatments that improve health. We also know the entire genome sequences of hundreds of microbes, including those of many important pathogens. Analysis of this data will eventually lead to an understanding of the function of critical enzymes in these microbes and the development of tailor-made drugs to stop them. The rapid sequencing of SARS-CoV-2 allowed the development of vaccines and the tracking of various variants of the virus. In addition, scientists are mining the genomes of other microbes for novel antibiotics and combining various genes and pathways to create even more new drugs. Biotechnology firms can use this technology to create living synthetic factories that create many other useful compounds. The tools of molecular biology will also affect agriculture. For example, we now know the complete genome sequence of the plant Arabidopsis(a close relative of broccoli and cauliflower). Knowing plant sequences creates a better understanding of all plants and hopefully improvements in important crops.

Microbes have a profound impact on every facet of human life and everything around us. Pathogens harm us, yet other microbes protect us. Some microbes are pivotal in growing food crops, but others can kill the plants or spoil the produce. Bacteria and fungi eliminate the wastes produced in the environment, but also degrade things we would rather preserve. Clearly, they affect many things we find important as humans. In the remainder of this chapter, we take a look at how scientists came to be interested in microbes and follow a few crucial developments in the history of microbiology.