Before we begin the adventure that we call learning microbiology (it is an adventure! Really!), a look at the history of microbiology will help you understand the contributions of those who have come before. This perspective will hopefully give you an appreciation of their efforts and put the body of knowledge we will examine in the context of history. Keep in mind that microbiology is a relatively young science. It was only about 140 years ago that it became possible to seriously study microorganisms in the laboratory, with most of our understanding of microbes coming in the last 60 years.

The history of microbiology, like all human history, is not a catalog of linear progress but is more of an interweaving of the careers of bright individuals and their insights. Each discovery relied on previous ones and, in turn, spawned further inquiry. A web of interdependent concepts evolved through the work of scientists in many related disciplines and nations. Often the research of one individual impacted the efforts of another studying a completely different problem. Keep this in mind as you look at this history.

Below, we present several journeys through this web, mentioning some individuals who were particularly important in the progression. This history reflects our view of important events of the past but is by no means comprehensive. We will first look at the development of the techniques for handling microorganisms since everything else in microbiology depends upon these procedures. Next, we will examine how these techniques helped to settle an old debate, the question of spontaneous generation. Then, we will look at the history of infectious diseases. The science of microbiology had its most significant early impact on human health, uncovering the cause of the major killers of the day and then methods to treat them. As microbiology matured, scientists began to look at what non-pathogenic microbes were doing in the environment, and we will look a bit at the history of general microbiology. Finally, the chapter will examine the events that lead to the understanding of life at the molecular level and the profound impact this has had on microbiology and society in general.

For years, the existence of microorganisms was suspected but could not be proven since bacteria were too small to be seen with the naked eye. It took the microscope to expose their tiny world, and that instrument has been linked to microbiology ever since. In 1664, Robert Hooke devised a compound microscope and used it to observe fleas, sponges, bird feathers, plants, and molds, among other items. His work was published in Micrographia and became a popular and widely read book at the time.

Several years later, Anton van Leeuwenhoek, a fabric merchant and amateur scientist (or "natural philosopher" as such people called themselves), became very adept at grinding glass lenses to make telescopes and microscopes. While crude by modern standards, his were a technical marvel for the time, able to magnify samples greater than 200-fold - a reproduction of a Leeuwenhoek microscope is shown in Figure 1.9. They also produced clearer images than the compound microscopes of the time. By peering through his microscope, Leeuwenhoek observed tiny organisms or "wee animacules" as he called them. He spent months looking at every kind of sample he could find and eventually submitted his observations in a letter to the Royal Society of London, causing a sensation. Hooke confirmed the findings of Leeuwenhoek, and his affirmative assessment garnered wide acceptance. Leeuwenhoek received many honors for his work and lived well into his 9th decade. 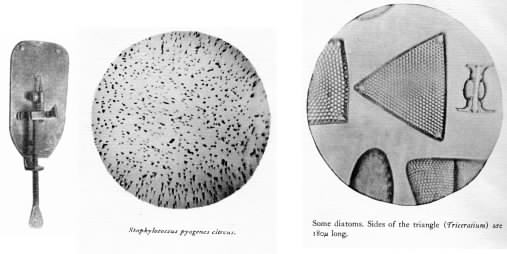 Surprisingly, there was no follow-up work on these findings for over 200 years. Human societies had neither the technical prowess nor the inclination to develop the science of microorganisms. It was not until the rise of the industrial revolution that governments and people dedicated the financial and physical resources to understand these small inhabitants of our world.

With the development of better microscopes in the 19th century, scientists returned to an examination of microorganisms. After finishing his education, Ferdinand Julius Cohn convinced his father to lay down the large sum necessary to purchase a microscope for him, one better than that available at the university in Breslau, then part of Germany. He used it to sift through the world of the microbe and made many observations of eukaryotic microorganisms and bacteria. Cohn published his landmark papers on the cycling of elements in nature in Ueber Bakterien in 1872. Other work, including a microbial classification scheme with descriptions of Bacillus, appeared in the first volume of a journal he founded, Beitraege Zur Biologie der Pflanzen.. Cohn's work with microscopes popularized their use in microbiology. His work inspired many other scientists to examine microbes. Cohn's encouragement of Robert Koch, a German physician by training, began the field of medical microbiology.

Robert Koch, pictured in Figure 1.10, searched for the causes of many diseases. Through these investigations, he and his laboratory developed many classic microbial techniques. He used adaptations of the staining methods of Carl Weigert to begin the process of distinguishing microbes and identifying pathogens. His lab was the first to isolate a disease-causing organism. 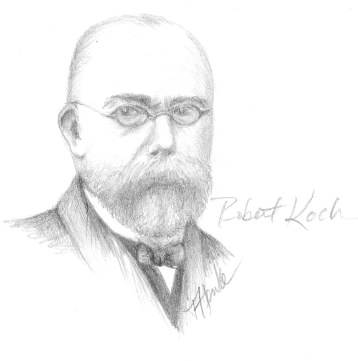 A major contribution to bacterial techniques was the development of methods using solid medium. For example rich medium or minimal medium for the cultivation of bacteria. Koch suspected that microbes caused some diseases. However, to test this idea, he needed to isolate the causative agent. Almost all samples from diseased animals or any natural surface contained many different microbes, and it was impossible to tell which one was the problem. Koch needed a method to separate these different bacteria. The most common isolation method was to continually dilute a sample in liquid broth, hoping that only one microbe would eventually be present at high enough dilution. A problem with this method is that the scientist would isolate only the most populous microbe, but that might not be one causing the disease. There were other technical problems with such a liquid-based system, so a solid medium would seem to provide distinct advantages. Koch had tried gelatin for these experiments with unsatisfactory results. Building on the work of Brefeld and Schroeter, Koch used potato slices as a solid medium and observed that a boiled potato left in the open air would develop tiny circular raised spots.

Examination of these spots revealed they were piles of microorganisms, and each spot had just one type of microbe in it. He realized that these colonies were pure bacterial cultures and probably arose from a single microbe species from the air that landed on the potato. By boiling a potato, slicing it with a hot knife, and keeping it in a sterile container with a lid, Koch could keep the potato sterile. But if he smeared a sample from a diseased animal across the potato, colonies arose, each being pure isolates. By then testing these isolates in animals, Koch was able to isolate the cause of anthrax, Bacillus anthracis.

Potatoes failed to support the growth of many microorganisms, and Koch and his laboratory were constantly frustrated by the lack of a suitable solid medium. Walter Hesse joined Koch's laboratory to study air quality, showing remarkable attention to detail and patience in his work. His wife, Angelina Fannie Hesse, along with raising their three sons, also would assist her husband with his research in the laboratory. Walter was attempting to do his air quality experiments using a medium containing gelatin as the solidifying agent. In the summertime, temperatures would often rise above the melting point of gelatin. In addition, microbes would often grow in the cultures that were capable of degrading gelatin, and in both cases, this would cause liquefaction of the medium, ruining the experiments. One day while eating lunch, the frustrated scientist asked Lina (as he called her) why her jellies and puddings stayed solid even in the hot summer temperatures. She told him about agar-agar, a heat resistant gelling agent that she had learned about while growing up in New York from a Dutch neighbor who had emigrated from Java.

Development of the new agent by Angelina and Walter led to a resounding success. Few microbes can degrade agar, and it melts at 100 °C yet remains molten at temperatures above 45 °C. This property allows the mixing of the agar with heat-sensitive nutrients and microbes. After solidification, it does not melt until a temperature of 100 °C is again attained, facilitating the easy cultivation of pathogens. It can also be stored for long periods, allowing the cultivation of slow-growing microorganisms. Any broth can be mixed with agar, giving great flexibility in the kinds of media that an investigator can make. Thus, researchers could suddenly cultivate many more types of microbes. Agar is still used today as a solidifying agent.

Koch's laboratory also developed methods of pure culture maintenance and aseptic technique. Aseptic technique involves the manipulation of pure cultures in a manner that prevents contamination by outside microorganisms. Equally important, aseptic technique prevents their spread into the environment. Remember that Koch was studying some of the most devastating microbial pathogens of the period, and their release could potentially cause disease in the scientists working on them. These procedures were also absolutely critical because they allowed careful study of pure microorganisms, making it possible to identify the role of each microbe in a given situation.

Another problem in cultivating microbes was solved by Julius Petri while working in Koch's laboratory. Solid medium was poured on glass plates and allowed to spread and harden. Once cooled it allowed a solid surface for streaking. However, creating these plates required great care since exposure to the air (and the microbes in it) often leads to contamination. In addition, to prevent contamination of plates during incubation, researchers used a cumbersome bell jar. If one wanted to view samples, the plate had to be removed from the jar, further exposing it to unwanted microbes in the air. In 1887 Petri developed shallow glass dishes, with one having a slightly larger diameter than the other. Medium is poured into the smaller dish, and the larger one serves as a cover. This simple device solved all of the above problems and took on the inventors name, the Petri plate.

These same techniques are essential in studying all microorganisms. Collectively the above techniques have been used to isolate and identify thousands of different microorganisms. As a testament to the significance of their achievement, these techniques are practiced with remarkably little change in every laboratory that works with microorganisms today. Table 2 lists some of the early advances that helped to develop the practice of microbiology.

Table 2. The development of early techniques in microbiology.