Scientists long thought that only eukaryotic cells had a cytoskeleton to perform the functions of movement of organelles, the beating of cilia, chromosome separation, and phagocytosis. Bacteria and Archaea were small enough that this kind of structure was undetectable and thought unnecessary. With the advent of whole-genome sequencing, researchers were surprised to find that microbes had homologs of all known eukaryotic cytoskeletal genes and proteins. Scientists are just beginning to understand the role of these proteins in the cell, with three of the best-understood proteins being, FtsZ, MreB, and crescentin. This section will describe how these proteins play a role in dictating cell shape, motility, chromosome separation, and cell division.

MreB, as it is called in E. coli, is a homolog of actin, a eukaryotic protein involved in muscle contraction. MreB is a multi-functional protein, being important in forming cell walls (in rod-shaped cells), motility, chromosome segregation, cell-polarity (telling one end of the cell from another), and providing stability to the spore coat in Streptomyces species.

During its synthesis, the cell wall has to be synthesized in a distinct pattern. Even in the instance of bacteria that lack cells walls, cell shape is constant. In all these cases, the cytoskeleton plays a major role in helping to define the shape of the cell. Some of the most compelling evidence comes from mutants of MreB. MreB is a cytoskeletal protein found in most rod-shaped cells. MreB is an esential protein, as shown by experiments where inactivation of MreB (or similar genes in other bacteria) will cause the cells to lose their shape and become spherical, eventually becoming non-viable. 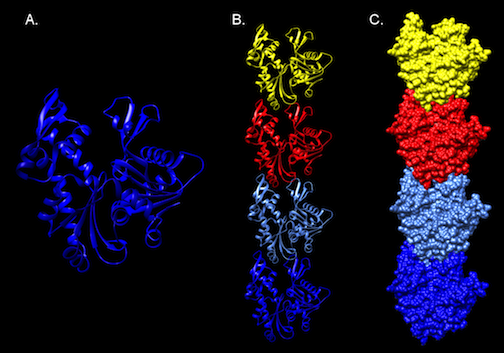 Figure 3.51. Molecular Structure of MreB. The crystal structure of MreB from Thermotoga Maritima. Panel A. A ribbon diagram of a monomer of MreB. A representation of part of a polymer of MreB as a ribbon diagram (Panel B), and as surface model (Panel C).Note the compact, building-block like structure of the protein, which can assemble into long filaments. Structure developed from the pdb file (1jce) as reported by Fusinita van den Ent, Linda A. Amos and Jan Löwe

MreB has a crystal structure that resembles actin (Figure 3-51), and it assembles into actin-like filaments. The latest research appears to show that MreB filaments assemble just inside the cell membrane. Initial observation of MreB in cells suggested the filament formed a helical structure that wound the length of the cell. Further inquiry has contradicted this picture with MreB forming strips instead of hoops inside the cell.

Crescentin (CreS) in Caulobacter crescentus forms a filament at the short axis of curved cell. This protein belongs to another type of cytoskeletal protein class called intermediate filament-like proteins (IF-like proteins). Scientists first described them in eukaryotes, but homologs are present in all domains of life. CreS is responsible for this curved shape, as CreS deficient mutants form straight rods. CtpS, a novel filament-forming enzyme, has also been discovered to be important in this process. CtpS and CreS interact, and regulation of this process dictates the curvature of the cell as it grows. Figure 3-52 shows various roles of cytoskeletal proteins in cell shape. 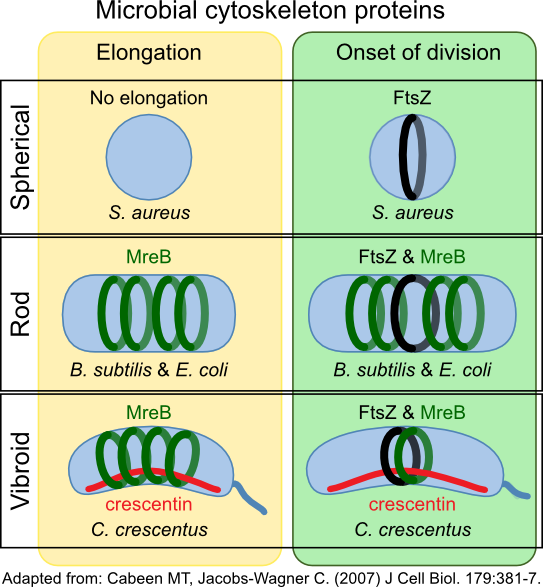 Other IF-like proteins have also been discovered in Helicobacter pylori. Four coiled-coil proteins (Ccrp48, Ccrp59, Ccrp1142, and Ccrp114) are essential for maintaining the spiral shape of the microbe. Deletion of any one of them will result in a fraction of the cells having a straight morphology. Scy (Streptomyces cytoskeletal element) is important in direction growth at the tips of hyphae of Streptomyces species and in determining new branch formation. A second IF-like protein in Streptomyces, FilP, is important in the stability of filaments in hyphae formation and for correct DNA segregation.

MreB has also been shown to be important in motility in some species. In Myxococcus xanthus, MreB and AglZ are important for forming a cytoskeleton onto which the gliding motility apparatus assembles. AglZ (another IF-like protein) assembles at the leading pole, migrates down the cell, and disassembles at the opposite pole. It seems to be forming a track to which adhesion proteins bind. These adhesion proteins then also interface with an environmental surface. The movement of the AglZ track down the cell thus causes the movement of the cell across the surface.

Three sets of proteins mediate separation of the chromosome during active growth by forming a partitioning system:

Several classes of NTPases have been discovered that provide energy for chromosome separation (ParA, ParM, or TubZ). They are structurally similar but do not share significant sequence homology. In addition, the mechanisms investigated in various species appear to use different processes to power the migration of the DNA.

Centromere-like sites were first described in Bacillus subtilis (parS) and found to be bound by a DNA binding protein (ParB). Bioinformatic analysis of 400 bacterial species has shown the presence of parS sites in 69% of bacteria, making it the best conserved DNA sequence ever described in bacteria. These parS sites are located close to the origin of replication.

The arrangement of the parS site, the involvement of a DNA-binding protein, and an NTPase suggests the following mechanism: After replication, the DNA-binding protein attaches to the centromere site. Some time later, given an appropriate signal, the NTPase activates and drives the separation of the two chromosomes, using nucleotide triphosphates to power the process. The exact details of how this process proceeds are not clear.

The cytoskeleton of bacteria also has a major role in the organization and implementation of cell division. An essential protein in this process is Fts. Fts stands for filamentous temperature-sensitive since mutants in this gene cause cells to be unable to divide and end up making long filaments in culture. Deleting this gene is lethal to the cell, and FtsZ is found in virtually all Bacteria and Archaea, with just a few exceptions.

After completion of chromosome replication and separation (directed by MreB), FtsZ proteins form a cytokinetic ring near the midplane of the cell. The point of formation of this ring is of great interest to the cells since forming it in the wrong place will cause an aberrant cell division. Thus, this process is tightly regulated by a whole series of proteins, Figure 5.53. 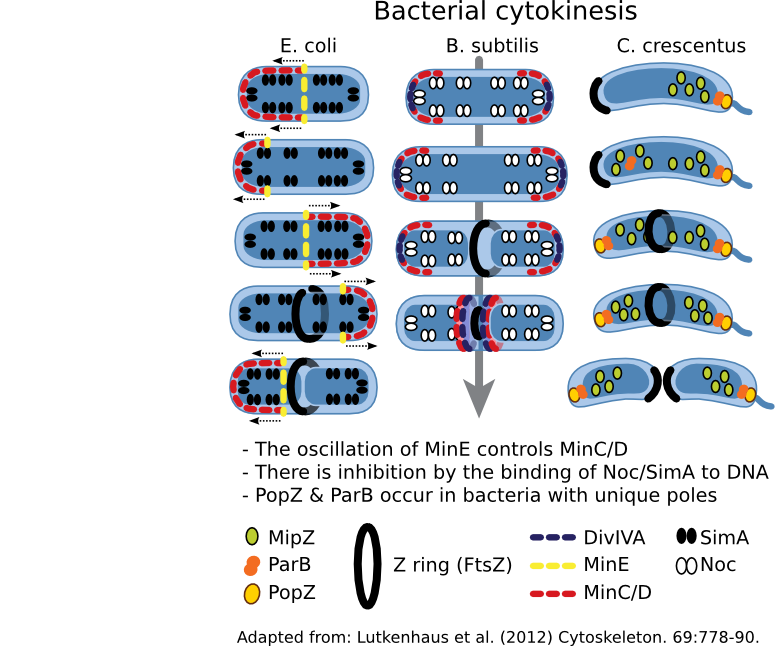 Figure 3.53. Regulation of cell division. The cytoskeleton in most bacteria directs cell division using FtsZ. This protein forms a Z ring that contracts, with concomitant hydrolysis of ATP, thus dividing the cytoplasm and directing cell wall synthesis. Where the Z ring forms is tightly controlled by the cell, but the mechanism used varies depending upon the bacterial species.

The Min system regulates the position of the Z ring in many bacteria so far examined. MinC is an antagonist of FtsZ and prevents Z ring formation. MinD, a membrane-bound protein, binds to MinC and localizes it to the membrane. In places where the concentration of MinC/D are high, FtsZ is unable to polymerize and form a Z ring. The presence of MinC/D is regulated by MinE, which binds to MinD and activates its ATPase activity, causing MinD to dimerize. In this conformation, MinD is knocked off the membrane, also removing MinC. A traveling wave of minE/D/C oscillates from end-to-end, resulting in the lowest concentration of MinC/D being at the center of the cell. Thus the Z ring forms in the center.

A second system is also found in many bacteria that employs nucleoid occlusion (NO). NO systems contain a protein (For example, SlmA in E. coli and Noc in B. subtilis) that binds to the DNA and, when bound to its site, will antagonize FtsZ polymerization. These sites are scattered throughout the chromosome but nearer the origin. Therefore, FtsZ ring formation cannot occur in the presence of DNA.

Both Min and NO systems suggest a model that contains a limited amount of FtsZ in the cell. However, Z-ring formation is promiscuous, and Min and NO prevent inappropriate ring formation at the cell poles or near the nucleoid. The absence of Min and the segregation of the chromosomes creates a low inhibition zone near the middle of the cell and allows Z-ring formation.

While Min and Slm/Noc have been found in a majority of bacteria, there are exceptions -- notably Caulobacter species. This genus lacks Min and Slm analogs and contains a unique system, where spatial the regulation system appears to be a hybrid of the Min and NO systems. A MinD-like protein, MlpZ, is recruited to the pole by ParB, bound near the origin of replication. Interaction with ParB dimerizes MlpZ, a form that antagonizes FtsZ. This dimerization is transient, and MlpZ eventually will decay into monomers. Thus a gradient of MlpZ is set up, whose concentration is dependent upon the nucleoid. When the chromosome replicates and segregates, a bipolar gradient is formed, with the low point being in the center of the cell where the Z-ring forms.