Before 1977, prokaryotes were phylogenetically organized into one group termed the Monera. The discovery of the extreme thermophile Thermus aquaticusin the hot springs of Yellowstone National Park by Tom Brock and the subsequent analysis by Carl Woese and others began a series of experiments that would change how scientists think about the organization of life on this planet. This revolution is the subject of later chapters, but here we will discuss the structural differences between this new group, the Archaea, and the Bacteria. "Bacteria" and "Archaea" refers to the formal phylogenetic classification of organisms, but we will typically refer to them more casually as groups of organisms and then use "bacteria" and "archaea". The third domain consists of eukaryotic organisms, both microbes and multi-cellular, and is referred to as Eukarya. As explained early in this chapter, it has become evident that eukaryotes arose when certain bacteria became engulfed in archaeal cells, eventually becoming organelles. Not surprisingly then, Archaea is a group of microbes that share some things in common with Bacteria, others with Eukarya, and still have other properties that are all their own. (see Table 2.5) In the following section, we highlight some of the major structural features of the Archaea.

Table 2.5 Comparison of properties between Archaea, Bacteria and Eukarya

Archaea are a unique form of life, as different phylogenetically from bacteria as they are from eukaryotes.

The major differences between Archaea and other domains of life

Figure 3.37. Control elements in bacteria and archaea. The best-studied bacteria have promoters at two positions upstream of the transcription start site that are recognized by the Ïƒ factors associated with RNA polymerase. The transcriptional control elements in the archaea are much more like those found in eukaryotes, where RNA polymerase is recruited to a promoter by interaction with protein regulatory factors, and transcription begins downstream of a TATA box.

The structural make-up of the ribosomes of bacteria and archaea are similar in many respects. The ribosomes of archaea and bacteria are of the same size (70S) and are smaller than those of eukaryotes (80S). However, most of the archaea's ribosomal proteins, translation factors, and tRNAs more closely resemble their counterparts in eukaryotes. Mixing experiments with ribosomes from E. coli(Bacteria), Sulfolobus(Archaea) and yeast (Eukarya) have shown functional substitution between Archaea and Eukarya. Specifically, mixing a small subunit from a yeast ribosome with the large subunit from Sulfolobus, results in a ribosome that is capable of translation in vitro. In contrast, mixing a small subunit from yeast with the large subunit of E. coli resulted in no translation. Also, in all organisms translation begins at a start codon (typically an AUG in the mRNA). In bacteria, this codon causes the insertion of formylmethionine, while in archaea and eukaryotes, it results in insertion of an unmodified methionine.

Archaeal membranes have features unlike those found in either eukaryotes or bacteria (Figure 3.38). In eukaryotes and bacteria, the fatty acids are attached to the glycerol backbone by ester bonds. In archaea, ether linkages link the polar groups to their long-chain alkyl groups. Also, the stereochemistry of lipids from archaea is primarily of the S form, while that of bacteria and eukaryotes is of the R form. In some archaea, the hydrophobic chains attached to the glycerol backbone are twice the normal length and pass completely through the membrane, attaching to a second backbone on the opposite side. This linked membrane adds extra stability, and these dual lipids are often found in archaea living in extreme environments. 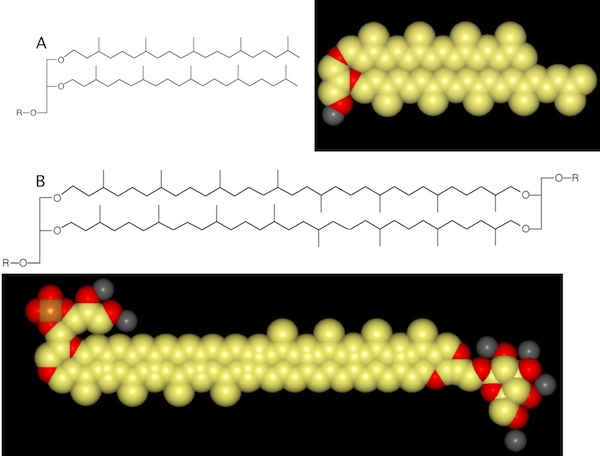 Figure 3.38. Ether-linked lipids. Archaea have an ether linkage between the long alkyl chain and the glycerol backbone, which is in contrast to the ester linkage seen in bacteria and eukaryotes. (A) An ether-linked lipid show as the chemical structure and a space-filling model. (B) A tetraether lipid, showing a general chemical structure. An example of a tetraether lipid from the thermophilic archaeal species Thermoplasma acidophiliumis shown as a space-filling model.

Most microorganisms in the Bacteria domain contain cell walls with peptidoglycan, with N-acetyl muramic acid being the signature molecule for the presence of peptidoglycan. Archaea are considerably more diverse in the composition of their cell walls. They lack peptidoglycan, but some contain pseudomurein that has a similar structure, as shown in Figure 3.39. N-acetylalosaminuronic acid replaces N-acetylmuramic acid in the molecule's backbone, and each glycan unit is linked together using 1,3 glycosidic bonds instead of the 1,4 glycosidic bonds seen in peptidoglycan. Many archaea do not contain peptidoglycan in any form, instead covering the outside of the membrane with proteins, glycoproteins, or polysaccharides. Scientists refer to these cell walls as S-layers. In any case, the function of the cell wall remains the same, containing the cytoplasm and giving the microbe its shape.

Figure 3.39. A comparison of cell wall structure in Archaea. Archaea have several different types of cell wall. Some contain a structure reminiscent of peptidoglycan called pseudomurein. The chemical formula is pictured on the left. Other microbes will have a surface layer (S-layer) composed of repeating units of one or a few proteins, glycoproteins or sugar. These crystal lattices serve to protect the cell. The micrograph on the right shows the surface of Methanospirillum hungateicells. Note the regular repetition of the pattern on the outside surface. (Source: M. Firtel, et al.1993. J. Bacteriol. 175:7550-7560)

These differences between archaea, bacteria, and eukaryotes indicate important differences between these life forms, and phylogenetic analysis bears out this conclusion. The archaea are more divergent from bacteria than we are from an amoeba. This significant divergence indicates that the common progenitor of these groups existed very early in evolution. Analysis and classification of the archaea has fundamentally changed how biologists think about organismal diversity.