Lipids are molecules with two personalities. One part of the molecule wants to associate with water, and the other does not. Molecules with these properties are termed amphipathic. Figure 2.29 shows that the backbone of the lipid consists of a three-carbon glycerol molecule. Hydrophobic, long-chain fatty acids attach to two hydroxyl groups on the glycerol. To the third hydroxyl group, a polar, and therefore hydrophilic, group is attached. Many bacteria contain phospholipids in which this third group contains a phosphate connected to a carbon molecule. The amphipathic nature of lipids is important in their function in the cell. 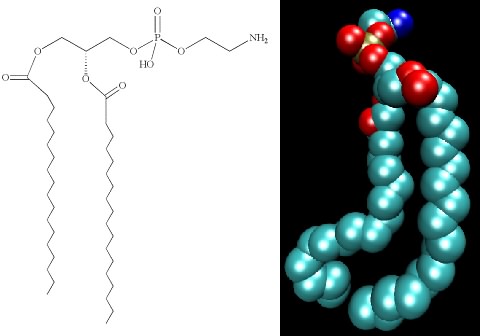 Most lipids are phospholipids, but about 50% of all known bacterial DNA also contain hopanoids, as shown in Figure 2.30. These molecules have a similar structure to sterols found in eukaryotic membranes and serve to help stabilize the membrane. Lipids will self assemble and form the cellular membrane, and Section 3-2 describes this process in greater detail.

Figure 2.30. A hopanoid. The chemical structure and space-filling model of a hopanoid, which is found in many different bacterial membranes.

Small molecules are also important in the cell

Several essential small molecules shuttle protons, electrons, or small carbon moieties around the cell. These small entities typically do their job in association with proteins to which they can be either loosely or tightly bound. All life on this planet seems to have settled on a surprisingly small set of molecules to perform these tasks. Almost certainly, the use of these molecules evolved early and has remained the same through the ages.

Most amino acids are not particularly good at either donating or accepting electrons and when they do, it is under a limited range of conditions. As you will read in the chapter on metabolism, the ability to move electrons among proteins is critical to all life, so two general types of prosthetic groups associated with proteins have evolved for this purpose. Figure 2.31 shows the two types of structures commonly shuttle electrons: organic, multi-ring structures and iron-sulfur clusters. In both cases, these carriers have characteristic affinities for accepting and donating electrons and protons. However, the surrounding proteins modulate these affinities. Thus, a wide range of electron carriers with different properties has evolved. By organizing these carriers in precise patterns in the cell, the cell can use the transfer of electrons to do work.

Small molecules in the cell also serve as carriers of important carbon compounds. Essentially, these carriers have the right chemical properties that make it relatively easy for enzymes to add or remove a particular carbon unit. Tetrahydrofolate and cobalamin (vitamin B12 ) are often involved in adding or removing one-carbon units during the synthesis of various structures in the cell. Coenzyme A is necessary for the transfer of small 2 to 4 carbon units (acetyl, propyl) from one enzyme to another. It finds utility in both the synthesis and breakdown of organic molecules. The beauty of using a small set of carriers is that it allows the easy movement of carbon from one pathway to another.

Many types of minerals are important for the proper functioning of enzymes. For example, magnesium ions are essential for ATP-binding by many enzymes. Zinc is important in the proper folding of some enzymes and iron, in the form of iron-sulfur centers and hemes, is critical in many electron transport proteins. Minerals also help bind structures in the cell together. For example, magnesium and calcium are necessary for the stabilization of membranes. Potassium ions in the cell shield the large amount of negative charge on the DNA allowing it to pack more tightly together. More will be said in later chapters about their specific roles, but some of the more important ions include K + , PO4 -3 , Mg +2 , Zn +2 , Ca +2 , Mn +2 , Fe +2 and Fe +3 .