1-3 Microbes have a large impact on human health

If you ask the average person how microbes (or germs) impact their lives, they would immediately think of disease. This response is not a silly view, as pathogenic microorganisms have greatly affected human populations throughout our existence. Until about 1930, microbes were the major cause of death in humans. In 1900, infant mortality rates in some urban areas were up to 30%. From today's perspective, this is a horrendous statistic; over half of all infants did not make it to adulthood! With the advent of antibiotics, vaccines and better water sanitation, humanity has reduced the impact of pathogenic microbes, but they will always remain an important social concern. The discipline of microbiology emerged from the study of these diseases, and most advances in treating various ailments had their roots in this relatively young science. Figure 1.3 shows some important pathogens. 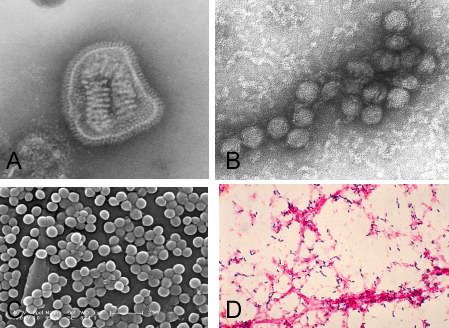 While death from infectious disease in the U.S. has been dramatically diminished, infection rates in developing nations remain unacceptably high. "Ancient" diseases continue to be a problem where nutrition and sanitation are poor, and emerging diseases such as Acquired Immunodeficiency Syndrome (AIDS) are even more dangerous for such populations. The Centers for Disease Control and Prevention (the U.S. government agency charged with protecting human health and safety) estimate that HIV infects about 9% of adults aged 18-49 in Sub-Saharan Africa. Yet as you can see in Table 1, AIDS is only one of a number of new diseases that have emerged. Many new diseases are viral in nature, making them notoriously difficult to treat, and they have no known cure. In addition, influenza and pneumonia are leading killers of the elderly, even in the U.S. and other developed nations. Even the common cold causes illness and misery for almost everyone and drains the productivity of all nations.

Disease due to food-borne pathogens is an increasing problem, primarily because of the consumption of improperly processed or stored foods. Understanding the sources of contamination and developing ways to limit the growth of pathogens in food is the job of food microbiologists.

New infections continually appear. Having an available food source to grow on (humans) inevitably results in a microorganism that will take advantage. Some of these feeders will interfere with our well-being, causing disease.

Surprisingly, many diseases that have behavioral or genetic components we now suspect have microbial components. The clearest case is ulcers, which were long thought to be caused by stress and poor diet. However, the causative agent is a bacterium, Helicobacter pylori, and antibiotics can cure many of them. Work on other non-infectious diseases such as heart disease, stroke, and some autoimmune diseases also suggest a microbial component that triggers the illness.

Finally, some pathogenic microbes that had been "controlled" through the use of antibiotics are beginning to develop drug resistance and therefore reemerge as serious threats in the industrialized world as well as developing nations. Tuberculosis is an illness that was on the decline until the middle 80's. It has recently become more of a problem, partly due to drug resistance and partly due to a higher population of immunosuppressed individuals from the AIDS epidemic. Staphylococcus aureus strains are emerging that are resistant to many of the antibiotics that were previously effective against them. These staph infections are of great concern in hospital settings around the world. Understanding both familiar killers and new pathogens will require an understanding of their biology, and thus an understanding of the field of microbiology.

Microbes are often helpful, not harmful

From the beginning of microbiology, significant resources have been spent to understand and fight disease-causing microorganisms. You may be surprised to learn that only a small fraction of microbes are involved in disease; many other microbes enhance our well-being. The harmless microbes that live in our intestines and on our skin help us fight off disease. They actively antagonize other bacteria and take up space, preventing potential pathogens from gaining a foothold on our bodies. The microbial community in humans not only protects us from disease, but also provides needed vitamins, such as B12. We have entire communities of microorganisms in our digestive systems that contribute to our overall health. In fact, like all other large organisms, humans are consortia of different organisms - there are more non-human cells in and on our bodies than there are human cells! Recent experiments that have examined microorganisms inside our digestive tract by intensive sequencing experiments have revealed many interesting findings. More than 80% of the microbes in our guts have not been cultured. In addition, the microbiota of a person is unique to that person, and there are differences based upon body type and genetic background. These differences in our microbial partners have profound effects on the physical health of the individual.

Human health and nutrition also depend on healthy farm animals. Cows, sheep and other ruminant animals utilize their microbial associates to degrade plant material into useful nutrients. Figure 1.4 shows the cow, one example of a ruminant animal. Without these bacteria inside ruminants, growth on plant material would be impossible. 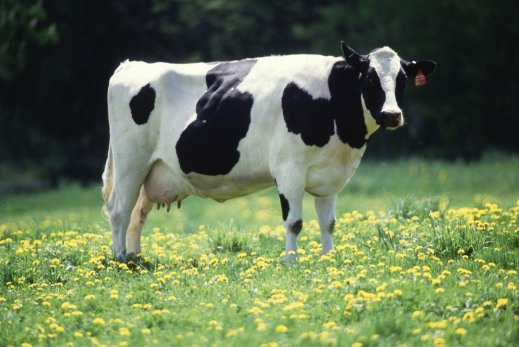 Figure 1.4. The cow as an example of a ruminant animal. In contrast to humans, ruminant animals have a complex system of stomachs that harbor large numbers of microorganisms. These microbes degrade the tough plant material eaten by the animal into usable nutrients. Without the assistance of the microbes, ruminant animals would not be able to digest the food they eat. (Source: Keith Weller, USDA.)

Commercial crops are also central to human prosperity, and much of agriculture depends upon the activities of microbes. For example, an entire group of plants, legumes, forms a cooperative relationship with certain bacteria. These bacteria convert nitrogen gas to ammonia for the plant, an important nutrient that is often limiting in the environment. Figure 1.5 shows a leguminous plant and the special structures on the roots that house these helpful bacteria. Most plants also form cooperative relationships with fungi, the mycorrhizal fungi, that help the plant sequester and absorb needed nutrients. Microbes also serve as small factories, producing valuable products such as cheese, yogurt, beer, wine, organic acids, and many other items. In conclusion, while it is less apparent to us, the positive role of microbes in human health is at least as important as the negative impact of pathogens. 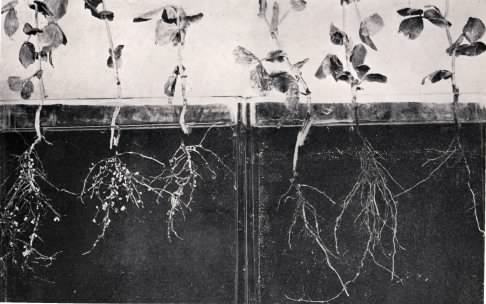 Figure 1.5. A leguminous plants.. Nitrogen-fixing bacteria form special structures, called nodules, on the roots of leguminous plants. In the picture, peas are shown that have either been exposed to bacteria (left) or not (right). The small bumps on the roots on the left are the nodules and contain millions of bacteria actively fixing N2 for the plant's use. Though not obvious from this figure, the plants on the left are more robust because of that nitrogen. (Source: E. B. Fred, et al., 1921. Soil Science 11:479-491.)