14-6 Vaccine development. How does it work?


The COVID-19 pandemic is not possible with the development of safe and effective vaccines. The goal of any vaccine is to create an immune response in the host that mimics a natural infection close enough to raise a protective immune response. Vaccines expose the host to enough of the pathogen to create this immune response without causing disease or any other life-threatening reactions.

The good news is that we have studied coronaviruses for years, which points out why basic research on seemly “esoteric” topics is essential. Ground floor research increases our foundational knowledge and often gives us a leg up in emergency situations such as this pandemic. Even more good news is that creating a vaccine against this virus should work. Go back and look at Figure 14-1. The prominent spike protein is a primary target of the immune response against the virus, and our immune system has an intense reaction against this protein that is protective. The current vaccines available for SARS-CoV-2 are amazingly effective.

Usually, the steps of vaccine development occur in three linear phases (Figure 14-5). Before clinical trials begin, experiments are performed in cell culture or animal models to demonstrate effectiveness. Phase 1 clinal trials then begin and involve testing the safety of a vaccine. An ideal trial will contain a control group that gets a placebo vaccine. These initial trials are typically small, using a few dozen people, intending to demonstrate no harmful effects of vaccination. The researchers also do experiments to measure the strength of the immune response and determine safe and effective dosing. Efficacy may also be looked at if enough participants end up contracting the pathogen. If researchers judge the vaccine to be safe, then more extensive phase 2 trials commence. A few hundred people, often a more diverse set, will receive the vaccine, again including a control group. Scientists follow participants in a similar fashion to the phase 1 participants and may compare different dosing schedules. Phase 3 trials involve thousands of participants but repeat the same steps, just with a large group. For a vaccine to proceed to production, it must demonstrate a protective effect against natural infection. These trials must take place in areas where the disease is currently spreading. One ethical concern when dealing with a deadly pandemic is the inclusion of a control group in the study. There are ways around this, but limiting the control group can make data harder to interpret. One possible solution is to run trials with multiple vaccine candidates that all share a single control group, allowing more subjects to get test vaccines. 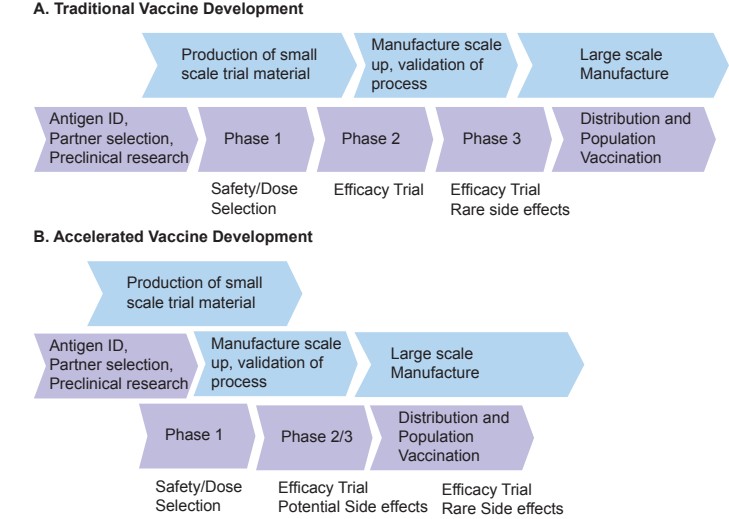 Figure 14.5. Vaccine development timelines. In a typical vaccine pathway, each step proceeds only after a previous step shows promising data.(A) Due to the urgency of the current pandemic, many governments and companies are using a compressed timeline.(B)

The development of vaccines has several pitfalls. It is essential to determine what part of the spike protein is going to raise the most vigorous immune response, and this is simply not known. Scientists making the vaccines have to make their best guess and test it. Any mistakes will cause delays. We were exceedingly lucky with the SARS-CoV-2 vaccines because the scientists guessed right. There is also the possibility that a vaccine will make the disease worse. It could raise a robust immune response that doesn't stop the virus but increases the reaction in host tissues, such as the lungs — causing more damage. What scientists will be looking for is a highly neutralizing-antibody response, which is more likely to be protective. Another important parameter is how long immunity to infection will last? Life-long immunity is ideal, but any significant period of protection would likely be helpful. The vaccines turned out to not have negative side effects and all of them were nearly 100% effective at preventing death.

With those cautions firmly in your mind, I will say there is room for optimism. The development of vaccines for the current pandemic is proceeding at warp speed. As soon as China announced that a novel coronavirus was spreading host-to-host, and the sequence was available, companies and scientists working on MERS vaccines shifted gears and began to develop candidates for SARS-CoV-2. Because of the urgency of the pandemic, scientists and governments worked around the clock and used a compressed timeline for vaccine development. Compression is possible by overlapping some of the steps. Regulatory preliminary steps are occurring before results are known. Once data is available, rapid decisions are possible. Manufacture scale-up of promising candidates can begin before the completion of final trials to enable early production if all goes well. This compression is financially risky, but backup support from governments can remove that impediment.

Currently, there are dozens of efforts to create a vaccine, and they generally fall into four categories, nucleic acid vaccines, whole virus vaccines, component vaccines, and engineered viral vaccine platforms. In the rest of this section, I will give you background on how each method works.

Nucleic acid vaccines are a recent innovation in immune therapy. A person is injected with either DNA or RNA that, due to the vaccines' formulation, ends up inside host cells. The cell then synthesizes the proteins encoded in the nucleic acid. Since the entire set of viral proteins is not present, there is no possibility of a viral infection. However, the host cell degrades the foreign viral proteins synthesized, and portions of them appear on the surface of the cell. This display mimics what would happen in a real viral infection, causing their detection by the immune system, which will marshal a response. The hope is that this immune response will be strong enough to protect against a real viral infection. While this is a newer platform, developers and regulators do have experience with this platform from developing personalized vaccines against cancer.

Moderna's mRNA-based vaccine entered phase 1 clinical trial less than ten weeks after the first genetic sequence of the virus was released. The initial results of this clinical trial were encouraging. It is safe to use in people. Even more encouraging, it was able to raise antibodies against the virus at levels that are comparable to those seen in people that have recovered from COVID-19 infection. Tests of eight of the subjects showed they had a neutralizing effect on SARS-CoV-2. Also, challenge experiments in mice vaccinated similarly showed they had immunity to the virus and didn't get sick. The results of the full cohort of volunteers are not yet available, and it is essential to have these before any further development can occur. The results of phase 3 trials showed the Moderna vaccine to be 95% effective at decreasing the risk of infection and serious disease.

Another approach to creating vaccines is to take just one small part of a pathogen, in most cases the part that the immune system can see and react to, and use that to create an immune response. For SARS-CoV-2, this will most likely be the spike protein, possibly supplemented with other proteins from the virus. Many conventional vaccines are component vaccines, including tetanus, diphtheria, pertussis, and pneumococcal vaccines. Thus, a known manufacturing platform is available to create a large number of doses quickly. There were nine such vaccines in development for SARS-CoV-2.

A significant concern with these vaccines is that it is not clear whether viral proteins alone will raise a protective immune response. An advantage of the other types of vaccines is that they more closely resemble a viral infection and elicit an antibody response and a cell-mediated response. Both of which may be necessary for protection against the virus.

Because the fastest vaccines out of the gate are novel, it is also necessary to continue developing more conventional vaccines. Whole virus vaccines involve using either a live, attenuated strain or an inactivated SARS-CoV-2 virus. These types of vaccines have a long, successful history of use in vaccine development. Inactivated virus vaccines require multiple doses and are slower to develop than nucleic acid vaccines. Attenuated vaccines take even longer than inactivated vaccines because it takes time to create a weakened version of the virus that is safe to use in humans. Several inactivated viral vaccines are progressing. The BBV152 vaccine manufactured and produced in India by Bharat Biotech has shown promise.

Whole-virus vaccines have the advantage of experience. Manufacturers know how to scale up successful candidates, and the infrastructure to grow them is already available. However, in both cases, large quantities of the virus will need to be grown to create enough doses for the world population, and this will take considerable time. Another advantage of these vaccines is their relatively robust nature for distribution in comparison to the mRNA vaccines.

A new approach that combines our knowledge of growing known viruses with the ability to include novel proteins is engineered vaccine platforms. These platforms use a known virus, such as the flu virus, that is modified to contain genes from a vaccine-targeted virus - in this case, the spike protein from SARS-CoV-2. The genetically modified flu virus is a self-limiting version of flu strains that replicates enough to cause a robust immune response, but not enough to cause disease. Yoshihiro Kawaoka and Gabriele Neumann, founders of the start-up vaccine company FluGen, were developing a new type of flu vaccine when the COVID-19 epidemic hit. Kwaoka's lab inserted gene sequences from SARS-CoV-2 into their vaccine candidate to create CoroFlu that should raise immunity to both viruses.

A key feature of this vaccine is its delivery into the nose, simulating the infection route of both viruses. CoroFlu then enters cells and begins viral replication. However, the essential M2 protein is missing from the virus, so it cannot escape the cells it infects. Instead, it elicits a hopefully strong immune response. The refinement of the vector and testing in animal models is expected to take three to six months. From there, the technology will be handed off to Bharat Biotech to manufacture CoroFlu and begin phase 1 clinical trials that could start as soon as the Fall of 2020.

If CoroFlu is successful, Bharat Biotech is capable of manufacturing 300 million doses a year. Given the urgency of the situation, the enlistment of other companies could provide enough for the world. CoroFlu is an untested, novel technology. It may be that a strong immune response against SARS-CoV-2 is not possible from this platform. An advantage of this method is that the infrastructure to grow large quantities of influenza virus is available, and the process is well known.

Another promising vaccine platform, invented at Oxford and being developed in partnership with AstraZeneca, is ChAdOx1 nCoV-19. Their vaccine uses an adenovirus that infects chimpanzees, but cannot replicate in humans. To this, they have added the spike protein from SARS-CoV-2. Since humans have never been exposed to this virus, they will not have a strong immune response against the vector. Thus antibodies will not neutralize the vaccine before the rest of the immune system can raise a strong immune response against the spike protein. Phase 1 clinical trials are now completed and published. A strong immune response against the virus was detected and shown to be able to neutralize the virus. AstraZeneca has received a $ 1.2 billion-dollar grant from the US for phase 2/3 trials that will enroll 30,000 participants in the US, 10,000 in the UK, 2,000 in South Africa, and 5,000 in Brazil.

This effort also succeeded, providing another weapon to use against COVID-19. The scientific team has experience using this vector in other vaccine trials. Infrastructure for growing the virus is already in place and can be scaled up rapidly to create millions of doses. Vaccine development will continue in all companies as boosters may eventually be needed against SARS-CoV-2.