In contrast to the innate immune system, the adaptive immune system's initial response to a pathogen is weak or non-existent, but as the host has time to respond, this system becomes quite vigorous. To respond to a pathogen, the adaptive immune system must learn to recognize it. The mental picture to have in your mind is that of the body taking bits and pieces of the pathogen (its antigens) and presenting them to certain cells of the adaptive immune system. Those cells that can react with the antigen then marshal a bilateral response with one set of cells producing antibodies (humoral immunity) and the other set activating a group of cells to attack the pathogen (cell-mediated immunity). In this part, we will describe the cells that are involved in the processing and response to antigens, followed by the next section when we will put it all together and look at the reaction of the entire immune system to two different types of pathogens.

In addition to their role in innate immunity, phagocytic cells also play a critical role in adaptive immunity. Macrophages and monocytes take a portion of the debris left over from the digestion of a pathogen and provide that as antigens to the adaptive immune system. This ability is not only present in macrophages but B-lymphocytes and dendritic cells as well. These cells are collectively referred to as antigen presenting cells. One of the more important cell types capable of antigen presentation are dendritic cells.

Most tissues of the body contain a cell type with long tendrils that wrap around and between neighboring cells. Because these branch-like projections are so similar to the intricate dendrites of nerve cells, these immune system components are called dendritic cells. There are four populations of dendritic cells named for their origin or location. Dendritic cells, Figure 16.1, are found in skin, mucous membranes, bloodstream, lymph and all solid organs of the body except the brain, the eyes and testes. 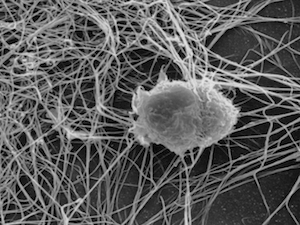 Figure 16.1. A Dendritic Cell. Dendritic cells are found in most tissues of the body, projecting their branches throughout the immediate area, they serve to monitor foreign antigens that may exist. If an antigen if found, it is taken up by the dendritic cell and presented to the immune system. File used with permission, by By Aszakal [CC BY-SA 3.0 or GFDL], via Wikimedia Commons

These cells play at least three roles in the body.

Dendritic cells are the only cells that can activate a naive T-cell and are the most potent antigen-presenting cells in the body.

Lymphocytes are the other major type of white blood cells important in the immune system, and they work in concert with phagocytic cells to combat infections. However, the role lymphocytes play in fighting infections is very different than that played by phagocytes. Lymphocytes, with the help of antigen-presenting cells, are part of what is called the adaptive immune system. This system has three important features that all depend on lymphocytes.

In many cases, the cells in the immune system need to communicate with other cells. When a cell is infected with a virus, it acts to notify its neighbors. When a tissue is damaged by bacterial invasion or physical injury, the surrounding tissue must be informed to begin the repair process. When cells are differentiating in the bone marrow, modulation of gene expression dictates the final cell type. In all of these cases, this communication takes place in the form of small proteins called cytokines and chemokines.

Cytokines are a group of small (less than 30 kDa) soluble proteins that regulate cellular function. Cytokines made by lymphocytes are called lymphokines. Table 16.1 lists some of the more important cytokines that play a role in the immune response. T helper cells, macrophages and monocytes produce many of these cytokines. Some of the most important cytokines are those that communicate between leukocytes and these are given the designation interleukins.

Table 16.1. Important Cytokines and Chemokines in the Immune Response

A large number of signal molecules are manufactured by various tissues of the body. The cytokines and chemokines listed here are important in various parts of the immune response.

Another important group of signal proteins in immunity are the chemokines. Chemokines are a set of small molecular weight proteins (8-12 kDa) that serve as chemoattractants to phagocytes and T cells. Damage to cellular tissue from bacterial invasion, viral infection or physical injury causes the secretion of chemokines. Since many parts of the body are susceptible to this type of damage, it is not surprising that a large assortment of cell types, including lymphocytes, are capable of synthesizing chemokines. Their production attracts T cells and phagocytes to the area of damage stimulating an inflammatory and immune response.